A revolution nobody cares about

So, yesterday the iPhone 4S was announced and the general sentiment was that it was a huge letdown. Even the media jumped on the bandwagon with news reports on CBC about how disappointing the whole deal was. Most sane observers will tell you the truth of it though: people get hung up on a name. An iPhone 4S sounds like a spec bump whereas an iPhone 5 sounds like a major upgrade, despite the fact that the new guts of the 4S are pretty impressive.

But one revolution that no-one seems to care about is the Siri voice assistant. The functional AI and incredible voice recognition technology that will open up a whole new world for the visually impaired. Bigger screens and thinner profiles are for kids who want a new toy so that it looks like their new phone is better than last year’s model. But this bleeding-edge technology heralds a new age of AI assistance and usability for the disabled. Why aren’t more people making a big deal about this?

Here’s a mock-up of where I think this technology could go in the very-near future: 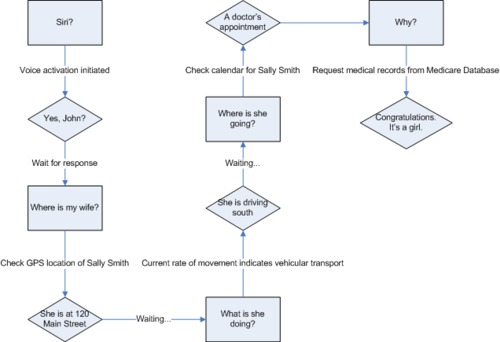 Now this doesn’t seem so far-fetched, does it? After all, they’ve been doing it on Star Trek for over 20 years now.