This year has been busy and exciting and just plain exhausting. But I’ve finally found some time to upload a bunch of the articles that I’ve had published this year for alive and blush magazines. The majority focus on green issues. I’ve been somewhat typecast as the devil’s green advocate, being asked to find flaws in all manner of righteous green concepts. To read one, click on the image. 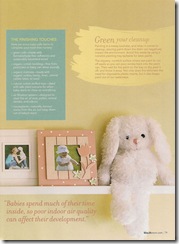 Baby’s nontoxic nursery: Preparing a healthy space for your newborn. What paints should you choose when decorating baby’s new room? Surrounding your new child with noxious fumes is the last thing you want to do. 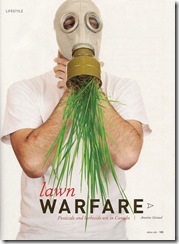 Lawn warfare: Pesticide and herbicide use in Canada. I interviewed the PR person from the David Suzuki Foundation as well as a professor of biomolecular chemistry to write this one. 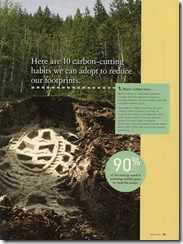 Get in the habit: 10 easy ways to shrink your carbon footprint. This one is self explanatory. But did you know the concept for a carbon footprint was derived from those newfangled desktops in the early 90s that stood upright instead of lying flat? 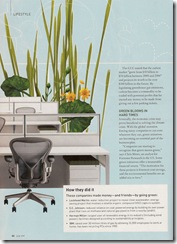 In it for the money: Green initiatives that are good for our ecology economy. This is one of those slightly cynical pieces. The intro comes from a really funny ad for IBM that you can watch here on Youtube. The art department did an awesome job with this one. 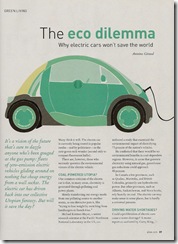 The eco dilemma: Why electric cars won’t save the world. Once again, an alternative look at a green deus ex machina (a term, incidentally, that I had originally used in the intro - but my editor wisely replaced this rather academic term with “save the day”). 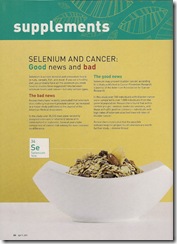 Selenium and cancer: Good news and bad. A short piece on the links between cancer and an antioxidant called selenium.

Two very short pieces: Cleaning our lakes - about a government restriction of phosphates, and When TVs die - about the switchover from analog to digital and the potential aftermath of discarded TVs in our landfills.

« Previous: It pays to be paranoid Next:   Saving my Geocities site »