And so the leaves fall

Before we get into it, let’s take a moment to acknowledge that America’s nukes will no longer run on giant floppy disks. Should we feel safer, now that a nuclear apocalypse no longer depends on a computer introduced in 1976? Not necessarily.

The military needs to rewatch Battlestar Galactica. The major benefit of using archaic offline technology is that it can’t be hacked. Indeed, the Galactica’s ban on newer networked computers was a key defence against the Cylons.

But change is inevitable. Maintaining an old system becomes more burdensome than embracing the new. I’ll admit, I’m too obsessed with getting the latest and greatest. Which is why I’m a bit jarred when I come across people who cling to the old and familiar.

For example, Microsoft is ending support for Windows 7 at the end of this year, and oh boy, is it causing problems. I was casually asked by a Windows 7 stalwart how long it will keep working for. Another year? Another five years? Honestly, I didn’t know how to answer. At work, some of our customers in the fishing industry are so fed up with having to use Windows machines that they’re asking us to bring back analog tech from the early 90s.

I can’t say I blame anyone for wanting to stick with what works, but Microsoft should really make the Windows 10 upgrade free again if they want to convert the last stubborn holdouts.

Still, there’s a lesson for me to learn here - I need to pump the brakes because new isn’t always better. For instance, I’ve recently been bitten hard by Apple with their disastrously buggy iOS 13 and Catalina software updates.

It’s kind of ironic that my original iPad Air, which is stuck on iOS 12, was spared. And there I was bemoaning the fact that it is no longer supported.

My wife’s iPad Air 2 was not so fortunate. I updated it to iOS 13 and it promptly stopped connecting to WiFi. Thankfully, a factory reset did the trick, although she was miffed about having to remember her Facebook password after restoring from backup.

Anyway, the most grievous issue I have with iOS 13 is the rapid battery drain on my iPhone 6S. There are times when I’ve lost up to 70 percent in one hour. I can’t seem to pinpoint the problem because my phone is telling me that the Podcasts app is the main culprit, even though I have background updates turned off. Low Power Mode doesn’t seem to help much either.

I toyed with the idea of buying a battery case, but can’t stomach the thought of doubling the phone’s thickness. In the end, I’ve assuaged my battery anxiety by setting a daily reminder to plug it in every afternoon. Hardly ideal, but better than throwing money at a five-year old phone. Hopefully this problem will get addressed in a later update.

As I wrote about last time, Jony is no longer with the company. There were rumblings that the thicker phones was the reason Jony Ive left. Personally, I don’t think his obsession with thinness would actually push him to quit - that would be a mild over-reaction. But this reversal in design philosophy doesn’t quite seem accidental.

The new iPhones also come with three cameras - a wide, an ultra wide and a telephoto. The camera improvements honestly look awesome and this is the first time I’ve looked at my iPhone 6S shots and wept a little inside. Just look at the difference between the 6S and 11 in low-light photography (Apple’s so-called “Night Mode”). Also, the additional software processing Apple is calling “Deep Fusion” looks like a worthy response to Google’s dominance in this area.

Google’s retort to the iPhone this year was weighed more toward imitation than innovation. Their new Pixel phones also came with more cameras, face unlock, and other iPhone-like features.

In my opinion, some of that Google magic has been lost in the transition from Nexus to Pixel. When it came out in 2013, I was a big fan of Google’s inexpensive Nexus 5 (and still use it, actually), but these Pixel phones just aren’t appealing at all.

They’re just too expensive - the Pixel 4 is actually more pricey than the iPhone 11! And quite frankly (I can’t believe I’m saying this), Samsung’s phones have a far nicer design. Sure, there’s no notch or pinhole, but the giant “forehead” and small “chin” makes the Pixel 4 look top-heavy and so obviously asymmetrical that it just feels wrong, even if you don’t have the words to explain why.

Furthermore, the poor battery life and the curious omission of an ultra-wide camera lens (despite having the same ugly square bump as the iPhone 11) just invite negative comparisons with iPhone hardware.

Let’s be honest - if you’re willing to compromise on hardware and shell out the big bucks just to get that “pure” Android experience, you’ve got bigger problems in your life.

I can’t write a post and leave out my popular ongoing segment! Unfortunately, there isn’t much to report on the notch front at the moment. Just to be clear - notchless Android phones are technically already here (such as the OnePlus 7 Pro), but come with compromises.

The OnePlus 7 Pro, for example, isn’t water resistant because of its pop-up selfie camera. It’s also extremely large, heavy, and completely non pocketable. The under-display sensor tech we’ve seen in Chinese R&D labs is most intriguing, but hasn’t appeared on any commercial phones yet.

As far as 2020 iPhone rumours go, all we have to go on are analyst predictions, which are fairly useless at this early stage of the game. The latest prediction has a smaller notch for 2020 with notchless displays being pushed out to 2021. Bummer? I’m sure we’ll get more substantial leaks next year.

Before the leaves fell

Hey, this is a personal blog, so how about a personal update. September was a busy travelling month. First, we went to Edmonton for my brother-in-law’s wedding, then we headed off to Maui a week later for a two-week family vacation.

I’d never been to Edmonton before, and since we never even went downtown, I’m not sure I’ve actually been there yet. Perhaps Edmonton does not exist, as some believe.

Family events took up most of the trip, but we did manage to visit North America’s biggest mall. They have an indoor ocean and awesome water slides. I tried most of the slides - but not all (due to my heightened instinct of self-preservation). It was a fantastic monument to the 1980s oil boom.

What can I say about Edmonton? The water doesn’t taste as good as in BC, nor is the air as fresh. The evidence of an oil-based economy is in plain view as you drive down the highways and see the oil refineries on the horizon with all those little shiny lights. But the people seem nice enough and everybody drives really slowly compared to Vancouver. It was also nice to get away from all the flexing of the rich West Coast dudes in their flashy cars and multi-million dollar homes.

The wind seemed unusually cold for early September, but that’s to be expected. Clearly, I’m running out of things to say, so here’s the view from our hotel room: 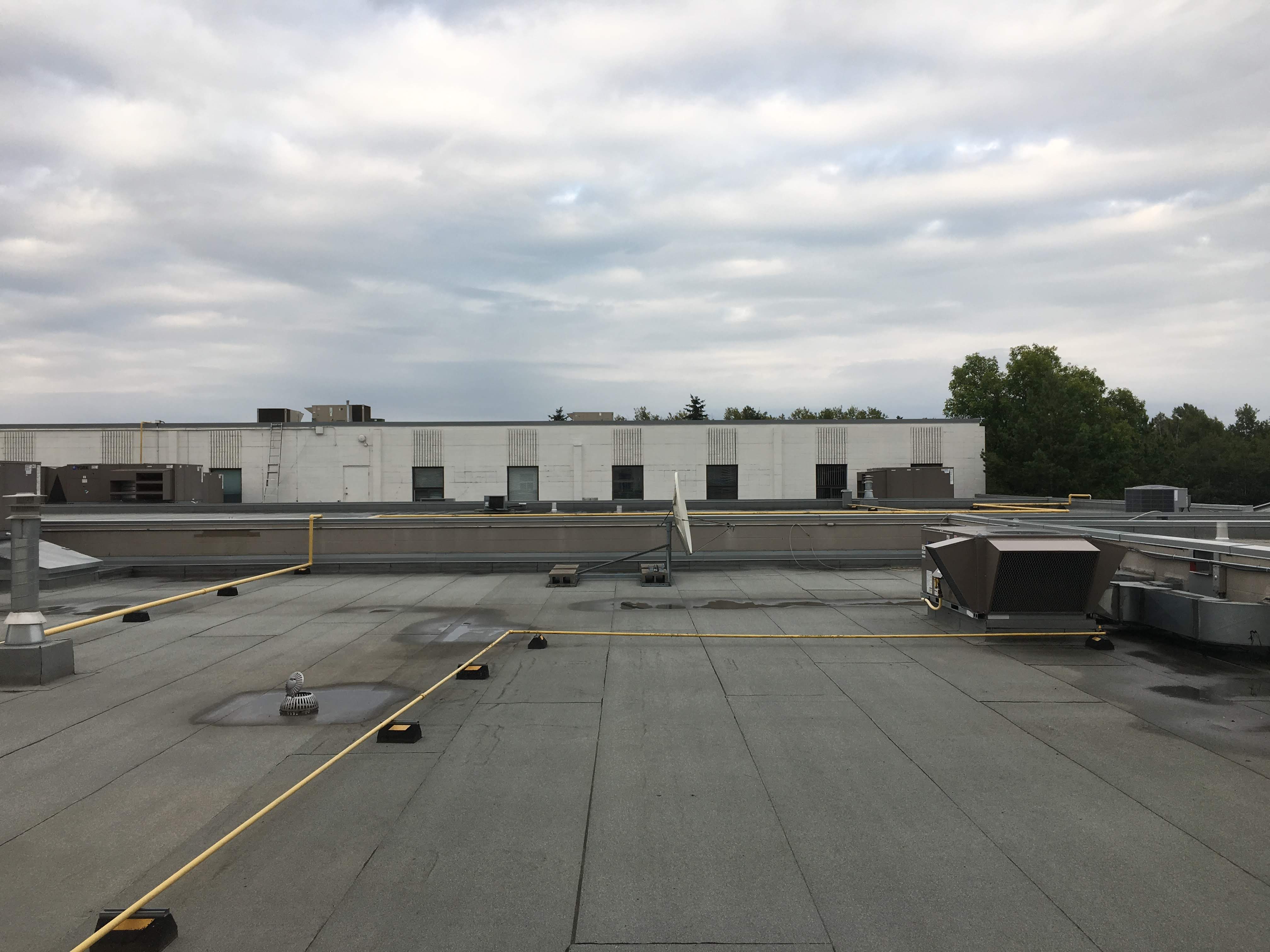 You could surmise that Maui is the complete opposite of Edmonton and you wouldn’t be wrong. Although, if you hate rainbows and sea turtles, perhaps Maui isn’t the place for you. So many rainbows.

Seriously though, the weather, beaches, and laid-back atmosphere are hard to beat. Also, unlike some less-developed countries where you leave the resort at your peril, you can go anywhere you want in relative safety.

We hit up all the highlights - most of the beaches, the road to Hana, Haleakala National Park, snorkeling at Black Rock and Honolua Bay. We rented a surfboard for a week and tried to catch some waves (my wife has more success than I). We had dinner at a sugar plantation, marvelled at a group of giant sea turtles hanging out on the beach, and hiked through tropical jungle so evocative I couldn’t help wondering why there aren’t any monkeys in Hawaii.

If you’re into beach vacations and are within a five or six hour flight, I give Maui two thumbs up.

There are always downsides to paradise though. This is real life after all. Maui is very expensive, especially if your currency is weaker than the US Dollar (which our Canadian Dollar is). The kids’ college fund is paying for this trip!

Also, Maui’s popularity has increased over the years to the point where it is noticeably busy - even in the off-season. For example, twenty years ago, you’d probably only encounter one or two other cars on the road to Hana. Now, it’s a literal caravan of vehicles even on a weekday (and good luck finding a parking spot at any of the sights). And if you were hoping to catch the sunrise at the top of Haleakala, you can’t just show up anymore, like you could a few years ago. Now you have to reserve a spot months in advance.

I could go on about how selfie sticks and Instagram has ruined tourism, but I’m not trying to be a buzzkill here. I’ll leave you with this picture I took of the black-sand beach, a hard-won picture precisely because it is devoid of tourists: 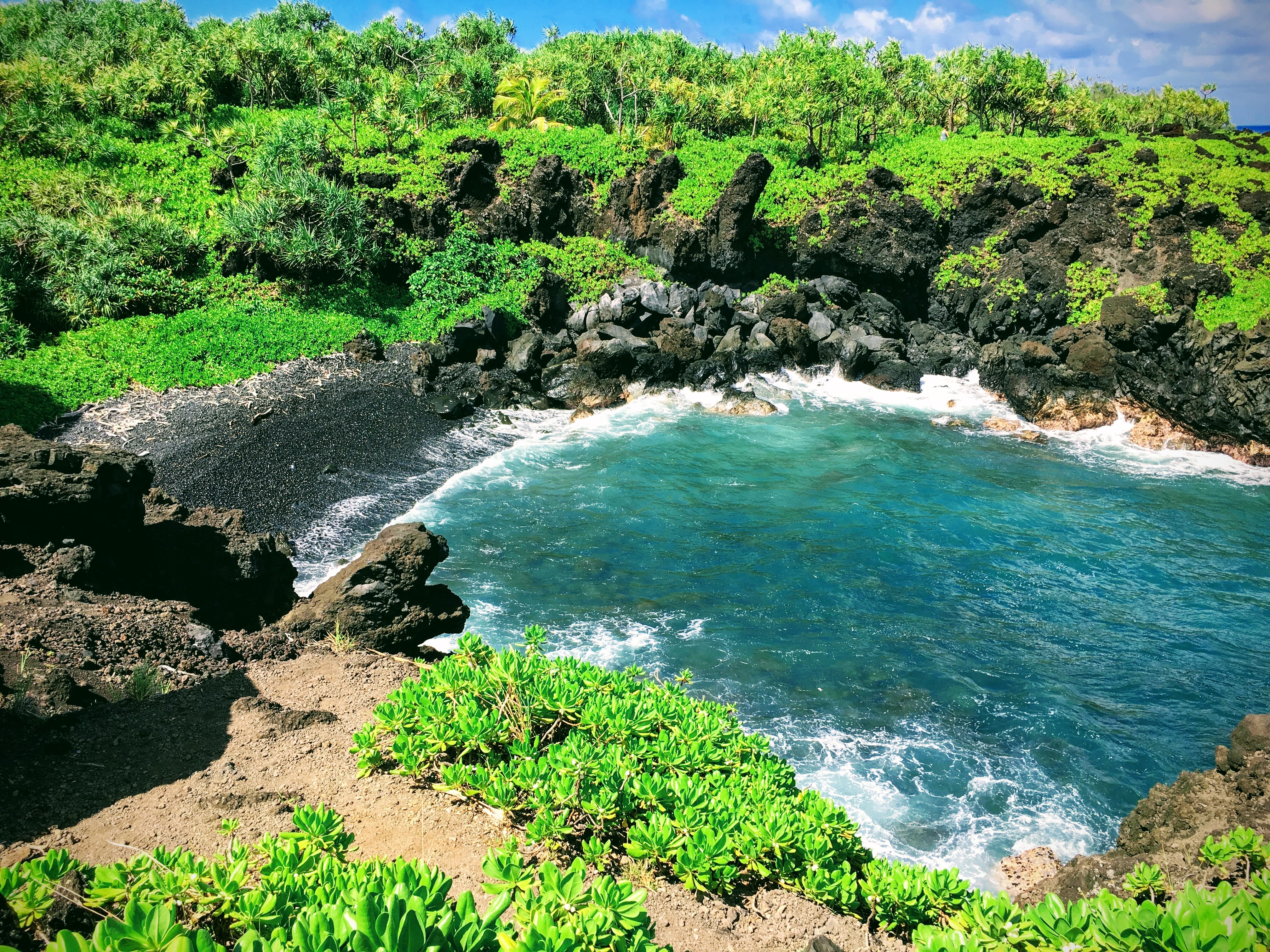 I can’t resist swinging back to tech before I sign off because It is that time of the year and a lot of cool new gadgets was announced in “techtober”. I just want to mention two hot new products that I wouldn’t hesitate to throw on my wish list.

Firstly, Apple’s AirPods Pro (weird-sounding pluralization, but it is grammatically correct). Although I can’t say I’ve even tried them, Apple’s regular AirPods have never impressed me. The fit seems a bit nebulous with some people saying they fall out really easily, while others have better luck. Also, the sound quality is on par with Apple’s EarPods, which is to say, not very good.

The Airpods Pro, however, are not only gratifyingly sophisticated (active noise cancellation, adaptive EQ, pressure equalization, transparency mode, etc.) but also have better sound quality. And more importantly, fit is no longer an issue - they come with different-sized silicone ear tips for all ear shapes.

They’re expensive, but actually worth the money now, whereas regular AirPods are not.

Secondly, remember when I said that I’d be all over a DJI drone under 250 grams that has a 12 MP camera? Well, DJI did it. The Mavic Mini is light enough (249 grams!) to avoid Transport Canada’s onerous legal requirements to register your drone and get a drone pilot certificate.

Also, it comes with a decent camera. I’d say the camera is on par with a smartphone camera, but that would be untrue because smartphone cameras have gotten so much better in the past two years. Still really good for a small drone though.

The thing is, I’ve sort of lost interest in getting a drone. It’s mostly the asshole factor that has spoiled drones for me. I just can’t stand it when a drone buzzes around me, and I just don’t want to be “that guy”. If I lived in a remote area, or hiked in the wilderness often, I would have bought one by now. But I live in the suburbs and there’s always families, dog walkers, retirees, or angry neighbours around who wouldn’t appreciate a mechanical mosquito buzzing around any more than I would.

However, I think the younger generations are going to be increasingly accepting of drones (and DJI is certainly marketing the Mavic Mini that way). If nothing else I’m impressed by the pace of drone technology. For example, the obstacle-avoidance AI being put into these things is incredible. I’m definitely keeping an eye on this space.