Banned for blogging about Apple

Seeing as I don’t make any money off this blog, I try to keep costs down to a minimum. And so, for the past eight years or so, I’ve had no problems using a free web host to manage my self-hosted Wordpress installation. Until now.

I’ve been pretty busy these days (for reasons which I’ll explain in a later post). But, wanting to post at least once a month, I navigated over to wordbit.com only to discover an ugly 403 error page instead of my home page. So, I contacted my web host support. This is what happened: 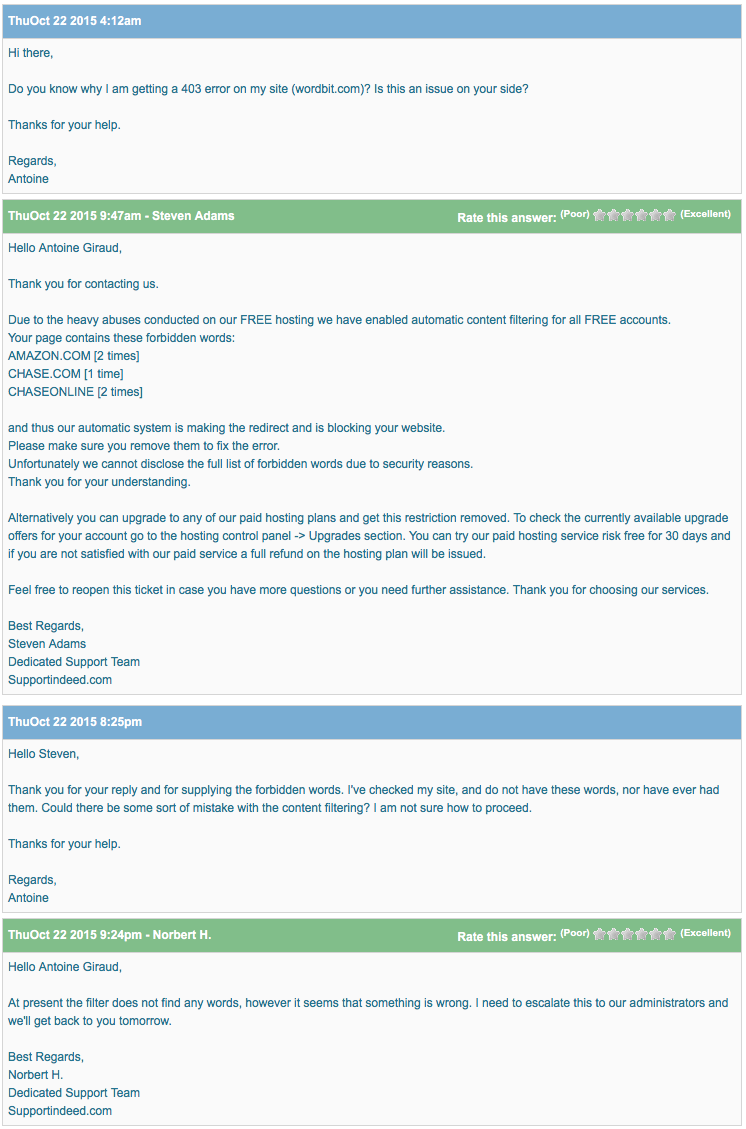 It seemed pretty obvious to me by this point that the web host wanted to purge itself of all free-loaders, even if it meant making up minor infractions. But since I’d never used any of the listed forbidden words, I figured I had half a leg to stand on. I was wrong: 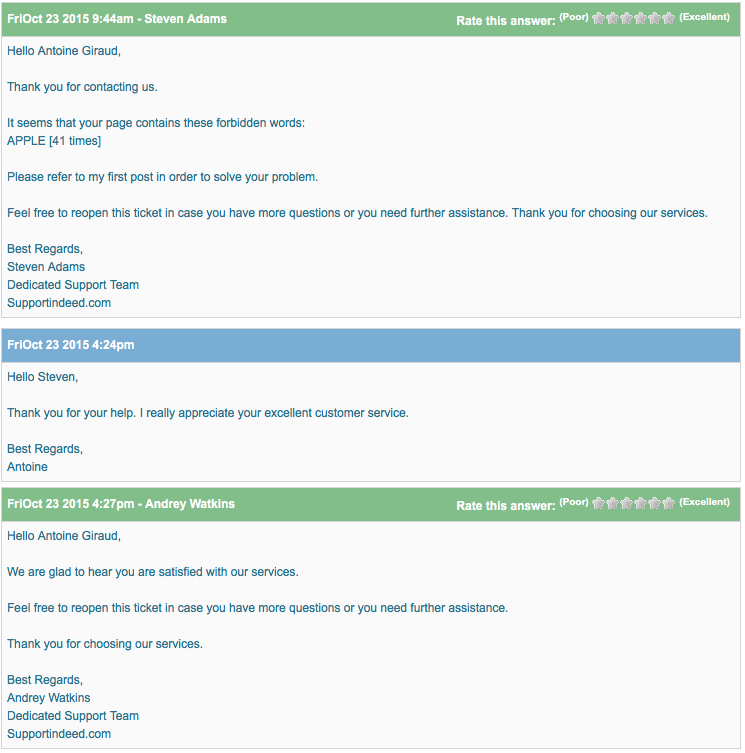 Guilty as charged - yes, I blog about Apple. And now I’d been banned for blogging about Apple. I’d say the whole debacle was asinine and petty, but that doesn’t even begin to address the irony of being banned for blogging about the biggest technology giant on planet Earth. My good buddy Steven probably decided he’d had enough of subverting service requests into sales. So he checked which word appears on my blog with the highest frequency and magically turned it into a forbidden word. Even though I’ve never even come close to “abusing” the service these past few years, I was now labelled a deviant.

Needless to say, I pulled the plug on the web host faster than you can say “Apple” and looked for a new home. I briefly considered Medium, but find their intentions for monetization hazy at best. And they only offer custom domain names by invitation. I thought seriously about moving to wordpress.com, but they have advertising now apparently. And no custom domain name, so that would mean hosting a launcher page somewhere else anyway.

The obvious and easy solution would have been to move to another free web host, but honestly, I’ve had enough. The internet at large has turned hostile toward bloggers. And I’m not just talking about the role social media has played in killing the blog. I think a lot of web hosts are setting fire to users who refuse to convert to paying customers. I also don’t want to deal with censorship ever again.

All this deliberation lead me to a hosting solution I’d seen a lot of software developers use - GitHub. Specifically GitHub pages. By checking files into a repository, content management mimics software version control. Without a doubt, the most popular static site generator out there is Jeckyll. Quick primer on static site generators - Basically, they compile all blog posts into a static html webpage instead of using runtimes like PHP and a database like MySQL.

Eliminating database calls makes the site lightning fast on the front end with page loads being virtually non-existent. But you still have to deploy the entire site each time you add a new blog post. Apparently Jeckyll isn’t the fastest. I wanted speed on the back end too, so decided on Hugo, which is snappy front and back.

I’m no software geek, so it was a tough weekend for me - learning the terminal command line; running Python and Perl scripts; setting up virtual machines; figuring out how cloning, branching, committing, etc. work in GitHub; finding the perfect Hugo template; and converting my Wordpress posts to markdown. Learning to write in markdown has turned out to be simply a delight. Well done, Gruber.

Anyway, I eventually got it to work. And it’s really great. The setup I have now is exactly what I wanted - minimalist, clean, and upholding the old-school hacker ethos of the web. I’ll have to undergo a gradual cleanup effort to smooth out formatting issues resulting from the conversion from XML to markdown, and fix all image links too. However, I’ve danced this dance before over the years as my content has moved around a lot - more than I’d like. Hopefully this time I’ve found a home where I can stay for a while. One where I won’t ever be censored for, I don’t know, blogging about topics every single other person in the world blogs about.

So, thank you Steven. You’ve forced me to learn new things and expand my skillset. Without you, I’d still be wrangling with Wordpress and using your dodgy control panel. Thank you for the nostalgia - going back to the command line is like returning home to DOS. And thank you for giving me that aura of cool that comes to those who are crazy enough to hack together a blog on GitHub. I still have no idea what I’m doing, but I’m happier now, Steven, much happier.