How do you know?

How do you know I’m real?

I didn’t think we’d get here so quickly. ChatGPT has revealed itself as the uncanny villain to writers everywhere. Writing on any generic topic has become meaningless overnight, because the AI can probably do it better.

Well, when I was in first grade, I threw up on a girl in reading circle and made her cry. I hate eating raw onions and cooked apple pie. I think Country music is the worst, but I love a good Western. On a trip to Europe with my best friend, we got into an argument. Then we just sat on a stairway in Florence for eight hours straight, refusing to speak to each other. I’ve never tried bungie jumping, nor do I plan to. Trust me - I’m human.

But isn’t that what an AI would say to convince you it’s human? 🤔

People have been using ChatGPT to write everything from college essays, to legal documents (saving them thousands of dollars no doubt), to their wedding vows (come on dude, so not worth it). ChatGPT can even write pretty good code.

I can promise you, however, that I have no plans to hand off my writing duties to an AI anytime soon and won’t even attempt the in-vogue party trick of asking ChatGPT to write a post and pass it off as my own writing.

There are of course problems with ChatGPT, the most troubling being that it states facts so confidently and eloquently, you’d assume those facts are true (they are often not). Don’t believe what you read, indeed.

But nobody can deny that how we think of the written word has forever changed, especially if you’re a writer.

Currently, OpenAI is burning three million dollars a day by giving the public access to ChatGPT. It’s only a matter of time, then, before the genie is stuffed back into the bottle.

But, you can’t kill a genie. What will happen a decade from now when that cost comes down and most of the written word on the internet is AI-generated?

Capitalism is all about saving money to make more money. There is no doubt in my mind that companies will default to the cheapest option by automating marketing and informational content instead of hiring writers.

Let me be frank - most marketing and informational content is pure bullshit. It’s just a tragedy that because humans have been striving for so long to write like robots, the robots will eventually take over.

But it won’t stop there - it is all too easy for an AI to analyze your tweets or reddit posts and imitate a credible social media presence on your behalf.

In the future, it will become impossible to find a real person on the internet.

It’s ironic - the internet was created to bolster communication, only to have it become an automated parody of communication. Since AI basically uses all the writing on the Internet for it’s training data, the internet will become a snake eating it’s own tail.

Maybe this is how Skynet starts, or maybe I’m being overly pessimistic. I asked ChatGPT to weigh on on whether AI will take over writer jobs in the future, and it was more optimistic, deferring to human creativity with just the right touch of humility: 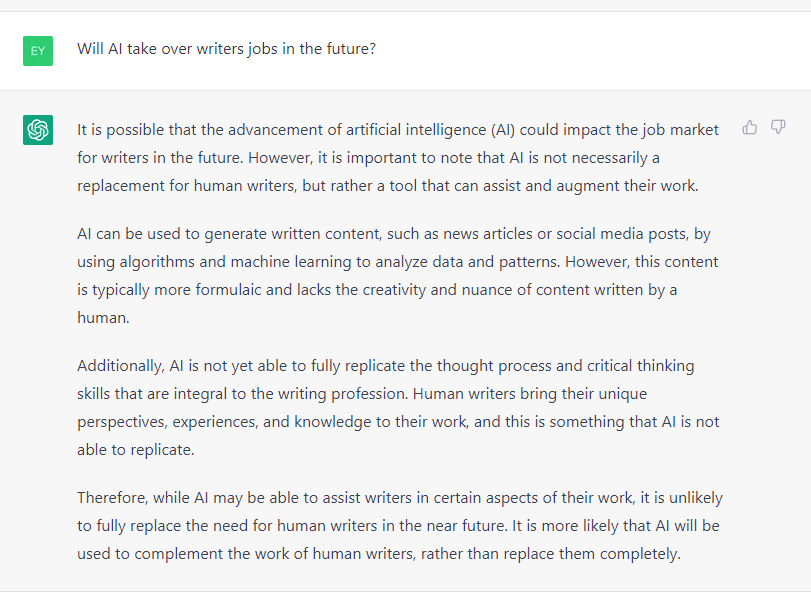 This answer didn’t make me feel any better though, probably because it was such a good answer. It’s like asking Picasso if your napkin doodle is any good - I’m sure he’d be very magnanimous and generous too.

Writing is hard - it is incredible that any words of value dribble out of such angst-ridden, insecure, emotional, biased creatures as ourselves. Honestly, ChatGPT and it’s future supercharged offspring are doing us a favour by producing such immaculate prose.

At the very least, those Nigerian Prince scam emails are about to get a whole lot more lucid!

Perhaps it is the imperfections then, that make human writing endearing and relatable. And in the future, imperfections will almost certainly be the only way to spot a human writer. I hope to still be writing in that weird future, warts and all.

On that note, I’d like to wish you and your family a Happy Christmas and wonderful New Year. Besides from the war in Ukraine, Elon Musk ruining Twitter, and the harbinger of the end of my livelihood, 2022 has been a blast.

Round these parts, it’s absolutely stunning outside - the world is blanketed in snow and everything is still and quiet. I just want to take it all in - this ephemeral moment of pure white, magical beauty before it all gets washed away.

Washed away in a future I can’t even begin to imagine. See you in 2023.