Musical cross-pollination with the tech industry 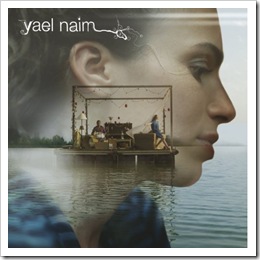 If you’re Homo Sapien then you’ve probably heard that song by Yael Naïm. Name not ringing any bells? You know, it’s the one that goes something like this: “La-la-la-la la-la-la-la-la…” Still not getting it? Okay, it’s the song from the MacBook Air commercial. Yes, you know the one (and if you still have no clue, check out this YouTube video).

The song is called “New Soul” and was handpicked by Steve Jobs for the MacBook campaign. As a result, Naïm, a previously unknown French-Israeli singer, became the first Israeli solo artist ever to have a top ten hit in the United States.

The power of the tech industry to elevate an artist to stardom is a relatively new phenomenon, but one that a flagging music industry desperately needs.

Because of that catchy song, I listened to the rest of Naïm’s album and thought it was fantastic - her songs are kind of Norah Jonesy, except in Hebrew.

Another artist is getting lots of exposure from un unlikely source is Ingrid Michaelson, who also landed gigs in an Old Navy commercial and on TV shows like Grey’s Anatomy and One Tree Hill. Google has chosen her website to be a pioneer in their new service Friend Connect, an OpenSocial networking app that can run on any website (unlike the gated communities of Facebook and Myspace).

According to a press release appearing today on Google’s Press Center,

…starting tonight, fans who visit Ingrid’s site can connect with their friends without having to leave the site. Visitors will be able to see comments by friends from their social networks, add music to their profiles, see who is attending concerts, and enjoy other features of the iLike application, all at Ingrid’s website.

Hanging out with Ingrid on her website doesn’t mean you have to leave your preffered social networking haunt. Friends from sites like Facebook, Google Talk, hi5, orkut, Plaxo, and more can all interact via Friend Connect.

This kind of cross-pollination of web 2.0 technologies with the music industry can only be a huge boon for starving artists who need new ways to market their music. Companies like Apple and Google are setting great examples that I hope the rest of the tech industry will follow.