It’s been about eight months since this pandemic started and I’m still working at home. I’m not sure why I said there was a second wave starting back in August, cause the real Second Wave is upon us now. Second Wave as in 1000-new-cases-a-day-in-BC Second Wave - eclipsing the paltry 30 cases a day that people were freaking out about back in March.

And yet, despite the vaccine slated for arrival early next year, it seems that a lot of people just don’t trust it. Granted, this is just the impression I get anecdotally and in the comments section on CBC articles, which isn’t very scientific. In other words, my data gathering has been far more qualitative instead of quantitative.

Incidentally, I was asked to define the difference between qualitative and quantitative data in a job interview once. I think I flubbed the answer. Kids - don’t throw away your notes from your college Sociology courses.

So anyway, although I’m no longer frantically refreshing the Johns Hopkins COVID-19 tracker map, I’m not attending illegal parties either. People, especially younger people, are worn out from the war of attrition with a tireless opponent who will never get angry, depressed, or defiant.

Also, mandatory orders about who you can or can’t invite into your home is starting to rankle even the most left-wing Bonnie Henry supporters, with that “C” word being floated around in public discourse. That’s “C” for Communism, by the way, in case your mind went somewhere else.

Unfortunately, it’s not the virus who is marching zombie troops onto the field - our greatest enemy is ourselves. And by “ourselves”, I mean our sociopolitical context.

With that “editorial” out the way, let’s turn our attention to the safer subject of this blog post: the one tool that every writer who works from home needs. It is, in fact, the most important tool for every bonafide writer and lover of fine things:

Do you need to spend a lot of time and money on this cultish hobby, shipping in artisan keycaps from Japan, geeking out on DIY forums, and building it from the PCB up?

If you know my frugal nature, then you already know the answer to that question. But before I get into mechanical keyboards on a budget, let me expound a bit. Cause that’s why you’re here - for wordy blog post action. But seriously, I’ll keep it short.

As I may have mentioned already, a few months ago I started thinking about building my own PC. I thought it would be a fun project, and I wanted a way to play all the free PC games I was collecting. As a sneaky entry point, and to get the ball rolling, I decided to get a wired mechanical keyboard. I only have a wireless Apple Bluetooth keyboard, you see, and budget motherboards don’t come with Bluetooth (or WiFi for that matter).

Well, it turns out that now is a terrible time to build a PC. Everybody on the planet is stuck at home and demand is so high that even older components are demanding a premium. Even Black Friday and Cyber Monday failed to bring any good deals on CPUs or GPUs. To make a long story short, I’m not going to be building a PC this year.

I don’t regret getting into mechanical keyboards though. The uninformed would shrug and assume a mechanical keyboard is just… a keyboard. But it really isn’t - I’ll get into that shortly. Ultimately, however, a keyboard is the one indispensable tool every writer uses and it should be treated with some professional reverence. You wouldn’t catch a butcher carving choice cuts of meat with a set of dull, rusty knives, would you? All you writers out there, listen up: your precious words flow from your mind to your hands to your keyboard. That flow can be interrupted by a slow, inaccurate keyboard just as easily as other distractions like Facebook or a delicious sandwich.

I won’t go into great length about the different choices and decisions you have to go through when selecting a mechanical keyboard, as others have done so in meticulous detail elsewhere.

There are many colourfully-named switches out there: red switches, brown switches, blue switches, black switches, and so on. Each colour denotes a different actuation force and distance. Some have an additional “clicky” sound to them.

Keycaps are the precious individual keys themselves, and you can spend a lot of money for a perfectly-sculpted keycap, using the finest materials, and the best fonts, with legends that will never wear off.

Do some research and you’ll either dive right in and savour over every new revelation, or become so overwhelmed that you’ll peace out on this whole mechanical keyboard thing. I’m certainly no keyboard connoisseur, so let me show you what I got to get my feet wet: 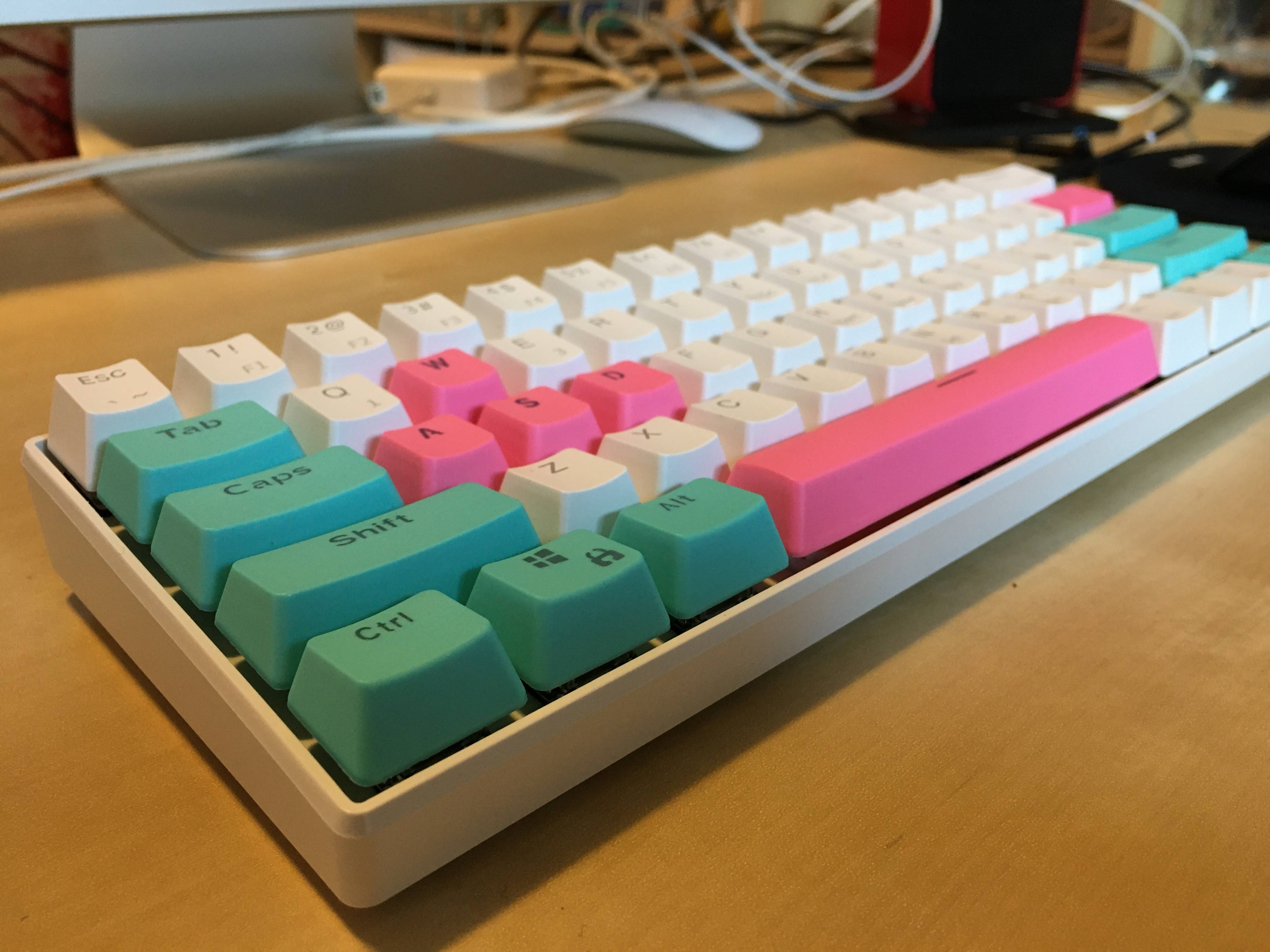 This is the Royal Kludge RK61, an ergonomic and compact 60-percent keyboard which I picked up on sale for only $60 CAD. The keys are optionally backlit with a pleasing blue and there are quite a few lighting effects available. I’ve been very happy with this budget mechanical keyboard. Not only are the keycaps swappable, but it has both wired and wireless Bluetooth connectivity. I’ve actually been using this keyboard connected wirelessly to my work HP Windows laptop and it’s made the work day at home a lot more fun. Ironic, I know, considering I got the keyboard because I wanted a wired one.

I really like the minimalist look of this keyboard, but as you can see, I did swap out a few keycaps with a “Miami” cyan and hot-pink themed keycap set on a few select switches. The keycap set only cost about $10 on Aliexpress. I think they look great and add that bit of customization to the keyboard you can’t get on the plastic junk they give away for free with most pre-built Desktops.

« Previous: The Apple Watch Series 6 Next:   The iPhone twelves »