I while back I got fined for parking at work. Yes, at work. The injustice of the situation hardened my resolve to never pay this fine. After a few softcore letters I received this hardcore final notice, which I kept because it is a fine example of Aristotelian logos, pathos and ethos being used to full effect. 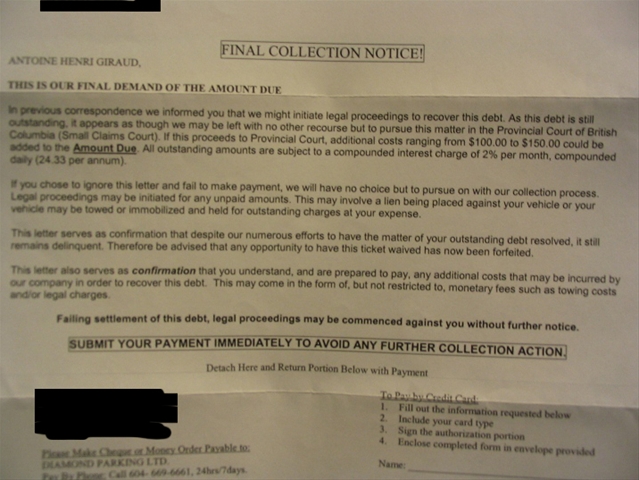 After reading it, I was almost persuaded to pay the fine because I thought I was being sued - at first. I then noticed all the cunningly placed “mays” and decided they were just trying to scare me.

A few months later, the case was handed over to some debt collectors, and they sent me this letter. 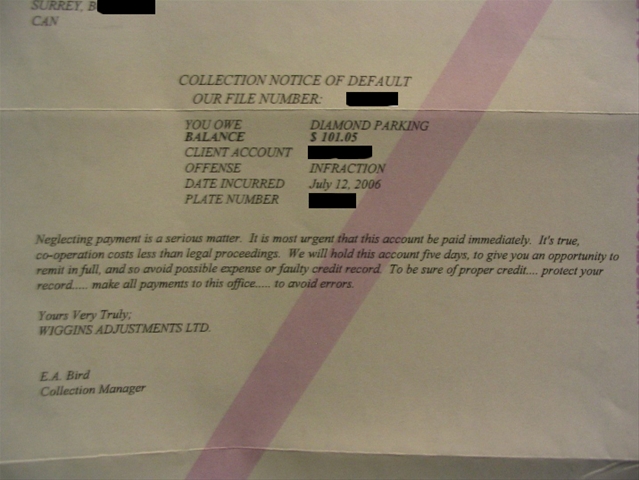 Needless to say, I was disappointed. After the previous rhetorical tour de force, this skimpy letter was positively anti-climatic. Not only that, but the grammar is astoundingly poor. Note the quintuplet ellipses. What did they do that for? Why did they have to be so grammatically offensive? After recieving this letter, I was certain I would never be tempted to pay this fine…ever.

The other night, after a bout of insomnia, I decided to pay this fine because God had a gentle word with me. He told me that paying was the right thing to do, and that I needn’t worry about my finances because I would be well taken care of in the future. He also said that I needed to write a letter to Mr. Bird and persuade him to cease profiting from the misery of others. I am to inform Mr. Bird that his job could hardly be spiritually fulfilling and that he should rethink his station in life. So, that’s what I’ll do. When I’m done writing that letter, I’ll share it with you.

« Previous: A sour Lululemon Next:   You missed a few »