The recent iPhone event was a triumph for apple’s marketing division. By putting last year’s model in a new plastic housing and adding a splash of colour, what is old is new again (iPhone 5C). And a tip of the hat can go to the engineering team for beefing up security with the fingerprint sensor (iPhone 5S). But at this year’s apple party, there was a once venerated apple device that was notably absent - the iPod. I can honestly say, that this is the one apple product I use the most: 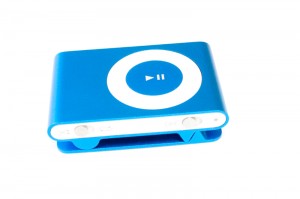 The second-generation iPod shuffle, with a design so perfect that when apple tried - and failed - to go with a new design in the third gen, they wisely returned to the second-gen design in later models. And guess what? It’s a wearable device;  That belt clip was a deft design decision - a laser-focused usability improvement targeted at the fitness crowd. Now when I hear rumours of an apple iWatch, I hope that maybe the shuffle will evolve after all.

But I also worry, is apple trying to please everybody? Is the iWatch going to be a fashion accessory with a fancy curved display that can proudly be brandished in a night club, as well as worn on a run? Because I can’t imagine sweating with something like that strapped to my wrist. The iWatch, proudly worn on the wrist as a testimony to apple’s brand, may shame the humble shuffle that sits hidden at the waist on somebody’s track pants.

Perhaps the shuffle is dead after all and that saddens me. But, then again this is all speculation. Will apple amaze us once again? I just don’t know. It hasn’t happened since Steve left us almost two years ago to this day.

An excellent article on the original iPhone published by the New York Times today really hit home - Steve Jobs was apple. The staggering amount of sheer will and engineering chops required to build a revolutionary new product from scratch just blows my mind. And Steve moved mountains to get it done. Looking back on the last two years at apple since his death, it’s hard to have faith that a technological breakthrough of this magnitude could ever happen again without him. But life goes on. And I’ll continue to run with my shuffle - a perfect device that may never evolve. And that’s okay.

« Previous: The spoiler wars Next:   The missing mom avatar »