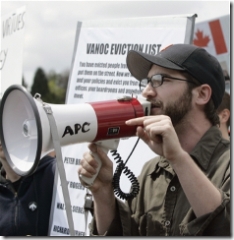 Some of you may know that Vancouver is hosting the 2010 Olympic Games and that the Vancouver Olympic Organizing Committee (VANOC) has been under fire for booting the impoverished out of the downtown eastside to make the streets pretty for the impending tourist influx. You may also have heard of anti-poverty activist David Cunningham, who threatened to symbolically evict all the board members of VANOC from their plush homes by camping on their lawn and performing some kind of ritual. Well, the VANOC members didn’t appreciate that and pressed charges, which led to this latest development.

A Vancouver police officer actually had the balls to impersonate a newspaper reporter (from 24-Hours) and arrange an “interview” with David at a mall, whereupon he was promptly arrested. Give me a break. Have the Vancouver police no integrity whatsoever? The editor-in-chief of 24-Hours is rightly miffed, according to this article, where he says that these sorts of ploys undermine trust in the media and destroy credibility. What was that cop thinking? He obviously thought 24-Hours doesn’t have enough independent clout to adopt an anti-police stance in their editorial, and he’s probably right. But that doesn’t mean other media aren’t going to have a field day with this one. Naughty, naughty Mr. Policeman.