What does your business card say about you? 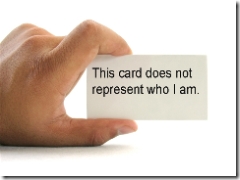 Business cards are so ubiquitous these days, but not many people consider how much of an impression their card really makes. Well, with the exception of some Asian cultures (In Asia the exchange of business cards is ritualistic - The reciever takes the card respectfully with two hands and studies it carefully before placing it carefully into a pocket for safekeeping).

Your business card is a little piece of you that somebody carries around in their wallet. Long after the memory of your brief encounter with another has faded away, the business card remains as tangible evidence of the meeting. After a while it is all that remains of you - it is, in essence, you. The smooth grain of the paper stock, the gentle weight of it, the charming colours and the inviting copy. A piece of art.

Or is it? Seriously, aren’t people taking it a bit far? In their fervour to design the perfect business card, people sometimes forget that it’s the medium that constrains the message. Cards printed with the limited technology of the early twentieth century, for example, were simple black on white affairs. Does this mean that people would dismiss Winston Churchill as a boring old oaf just because he had a simple card? People in the 21st century are desperate to be unique. These days people willingly sacrifice simplicity and functionality to make cards out of plastic, metal, wood, you name it - just to stand out.

How much credence can one place in a professionally designed business card? Ultimately, doesn’t the card say more about the designer than the person who owns it?

In the very near future, all this may become redundant. After all, the purpose of a business card is to pass along your contact information. Can you imagine a future where all two people have to do is whip out their cellphones and instantly transmit all that info via a wifi connection between the two phones. In fact, why not go to a networking meeting and instantly download the contact info of everyone in the room, go and check out their websites, read their blogs and learn more about them than a ridiculous piece of cardboard will ever tell you.

That future isn’t so far off. I’m betting the ritual exchange of processed wood fibre is nearing extinction.

« Previous: Are iPods losing their 'coolness'? Next:   Resources Page is up »