This story is a few months old, but it just came to my attention and I thought it was really neat. Scientists at MIT have successfully transmitted electricity through the air. In an experiment, they were able to successfully power a 60 watt light bulb from a power source two metres away. The team are calling this new concept “witricity”. 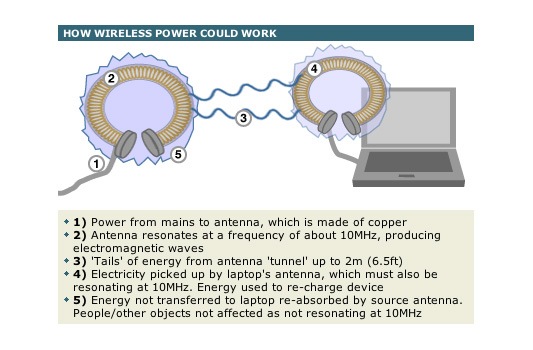 The potential for this new technology is pretty exciting. Imagine a world where laptops and cellphones could power themselves up when the batteries get low. No more worries about plugging in a “wireless” device every couple of hours. As it stands, it feels like laptops have to be constantly tethered to the wall and aren’t much more than portable desktops.

On the other hand, do we really need more stuff buzzing through the air? The neurons in our brain, for example, are fired off by electrical impulses. What effect would some added aerial voltage have on our cognitive abilities?