When he introduced the iPad Air in October, Tim Cook said this was “going to be an iPad Christmas,” and he was right. At least for me anyway. I mentioned recently that I was thinking of entering the tablet market. All the major players have laid down their cards for 2013 - ranging from Microsoft’s Surface 2 to Lenovo’s Yoga Tablet. But then the reviews rolled in. And nobody could come close to the iPad. Google could have had a shot if they released a successor to the Nexus 10, but they chose not to.

Back in 2010, when the original iPad came out, I decided to pass on it. I mentioned a couple of things that were missing from the first iPad, such as no front-facing camera or multitasking, both of which are now included in the latest iPads. I also mentioned a lack of USB ports. But, things have changed since 2010. Cloud storage is more ubiquitous and has rendered the flash drive somewhat obsolete (in my daily life, anyway). And the new Bluetooth 4.0 standard makes connected peripherals a non-issue when it comes to battery life. I also mentioned that I was thinking of upgrading my desktop to a laptop, having never actually owned a laptop. Well, I never did get that laptop, and have still never owned one. I upgraded to an iMac instead. So, when it came to choosing a portable PC, the iPad was a natural choice to augment and supplement my iMac.

Now is a great time to get an iPad. After five iterations, I believe this product has matured enough to overcome earlier engineering challenges. The high resolution “retina” display introduced in the iPad 3 was an amazing step forward, but added bulk to the iPad body. That problem has been solved with the much thinner and lighter design. In addition, the app market has had a few years to adjust to the retina display so that most apps are now optimized and don’t look crap like they did when transitioning from the iPad 2 to 3.

In that 2010 blog post, I thought that the first iPad was “like a shiny piece of the future, straight out of Star Trek.” Well, that wonder has worn off somewhat now that tablets have become so mainstream and commonplace. But, the incredible truth is that all modern tablets (including Android and Windows tablets) have surpassed Star Trek. I mean look at how thick and unwieldy these tablets are: 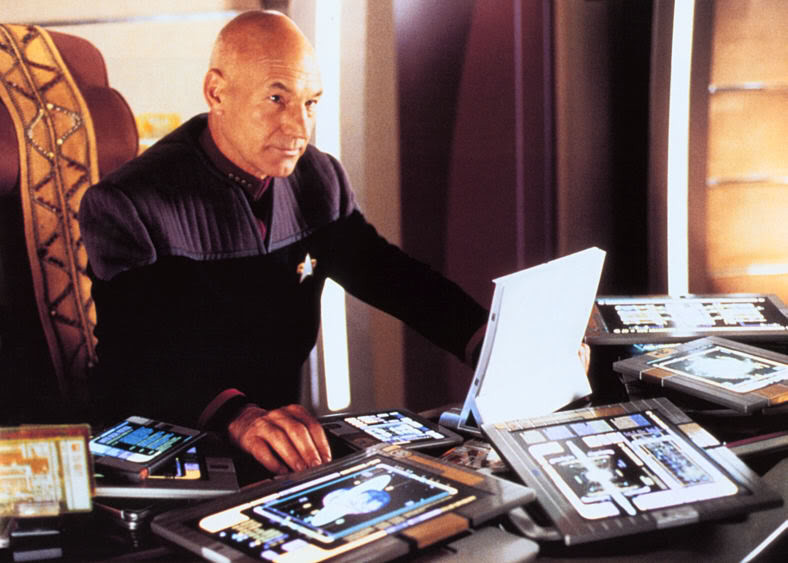 Well maybe that isn’t entirely fair, as the new aesthetic in Sci-Fi movies seems to be transparent tablets - not very usable at all. So maybe Star Trek nailed it, cause I can’t see opaque screens ever catching on. And with Google pushing for a full realization of the “Star Trek computer”, and Oculus Rift working on the holodeck, the future of tech is only going to get better!

« Previous: The rise of the content curator Next:   The fiction of writing fiction »